A Foreword by the Incoming Under Treasurer

I am delighted to have joined the Inn as its new Under Treasurer. But at this strange time, after months of working from home, I hope there will be slightly more to it than just coming downstairs and lifting the lid of a different laptop. The job I have taken on is rather different to the one advertised back in February. The way I will have to learn the ropes will be very different. I had hoped to be able to meet as many people as possible and talk to them; I would have assumed that would be over lunch in Hall, or perhaps in the garden. Instead, for a while, I will have to do that via Zoom, but I still hope to hear as much as I can about everyone’s priorities, both for the hoped-for immediate return to work and for the longer term. The Inn has endured plague, fire, the Blitz, and still risen again. I am looking forward to being part of the new resurgence, dealing with a new normal that few wise people would care to predict right now. I hope what I will bring now is flexibility, resilience, empathy and enthusiasm. Sadly, unlike John Bayliff, who served as Under Treasurer during the Civil War, I will not be able to bankroll it, even if you did repay me through the sale of the silver.

I suppose if we were meeting over lunch, I would tell you a bit about myself. As a keen linguist I studied English and French Laws at Exeter University, and found I was not very good at either. So, I joined the Foreign & Commonwealth Office (FCO). After postings in Thailand (spending a lot of time in court, bailing out distressed Brits) and Tanzania, where I met my husband, I found my true vocation – managing things. I discovered that managing the money brought me far more power than evolving the policy. It was interesting to work out how to maintain a little palazzo in Venice, a gothic monster of a consulate in Istanbul, and build a new embassy in Moscow (with as little ‘help’ from the local authorities as possible).

With those new skills, I abandoned the FCO and became one of the first non-legally qualified Justices’ Chief Executives for the new Sussex Magistrates Courts area; merging East and West, culling clerks, cutting courtrooms, and battling with the benches. It was a miserable but formative experience. Despite the horrors of annual cuts and endless ‘government by initiative’, I think we did improve the experience for victims and witnesses, and I learned how hard it is for both prosecutors and defence to progress cases, with lamentable rates of pay for the work. As yet more restructuring of the courts was announced, I made the move to become CEO of Leeds Castle in Kent. It is a stunning place, but it is an unsubsidised charity, with no endowment. I learned about generating income; maintaining crumbling medieval stonework; about the value of brand and quality; and I had a marvellous ten years, running everything from full metal jousts to the Northern Ireland Peace Talks. In 2014 I moved to the Commonwealth War Graves Commission; a rare opportunity to work to make commemoration of our war dead more accessible to new generations during the centenary of the First World War, and start a massive conservation programme for the 4,500 built structures, cemeteries and memorials, around the world, many designed by the same architect, Sir Edward Maufe, as the Middle Temple’s newer buildings.

I look forward to joining the community of the Middle Temple and finding ways to support members of the profession from their first steps in training, right through their careers, as they come to lead the Benchers and life at the Inn. The staff who have worked through the crisis have done a magnificent job at pivoting to working remotely, except for the few security personnel and Kate the gardener who have cared for the Inn in our absence, and the library team under Renae who have created a virtual service and prepared for the Ashley Building development. The HR, Membership and Finance teams have kept the show on the road; the Education team have found great new ways to engage through technology; and the Estates team responded to the needs of tenants, kept us safe, and got on with project work. Over half of the staff have contributed by agreeing to be furloughed, which has helped conserve the Inn’s resources. Each one has risen to the demands of this extraordinary situation and are all now keen to get back to work. Despite the challenges of social distancing, I hope we will be able to return to something which offers the same experience as has been enjoyed by members of the Bar for so many centuries. 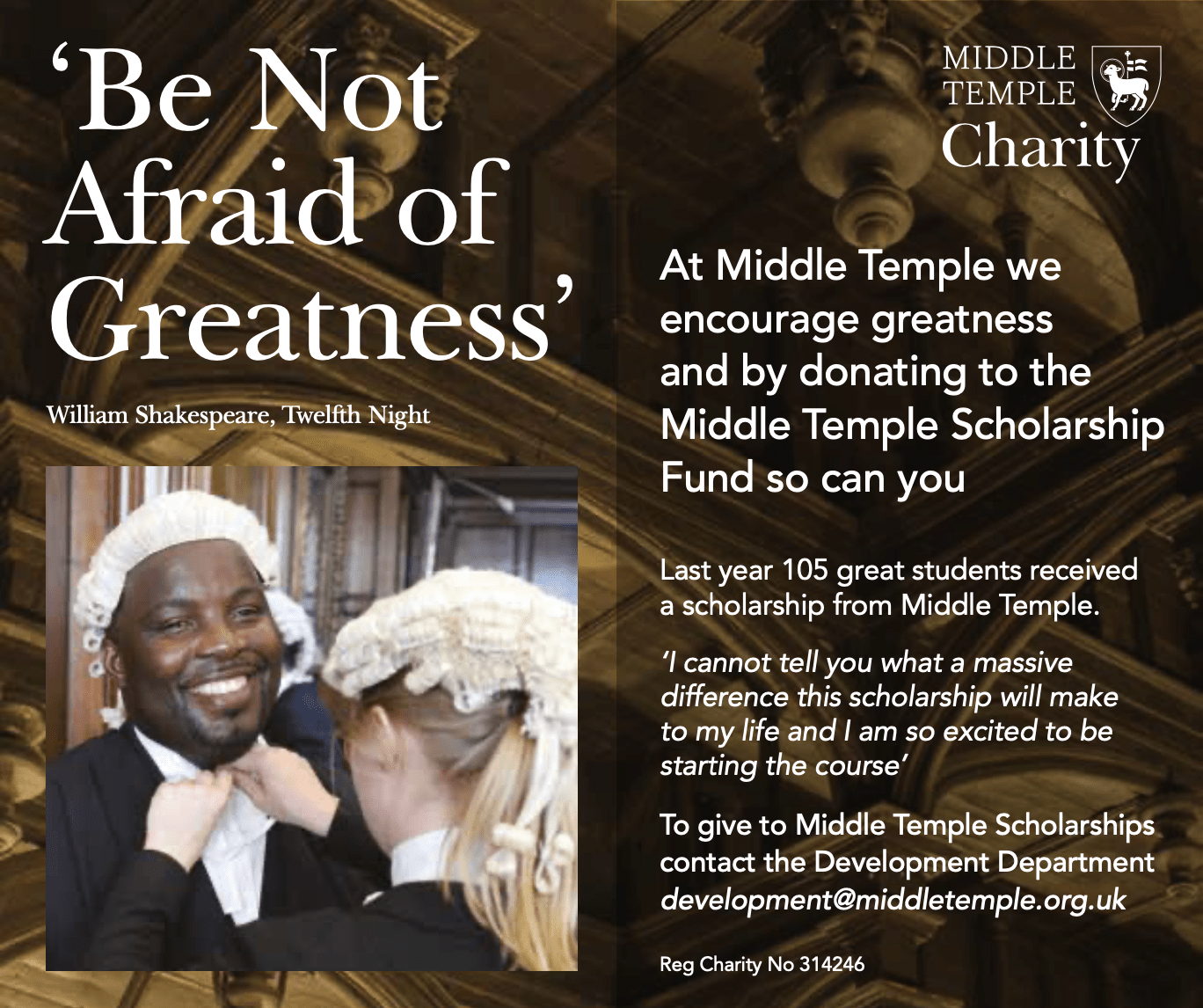 A Foreword by the Outgoing Under Treasurer