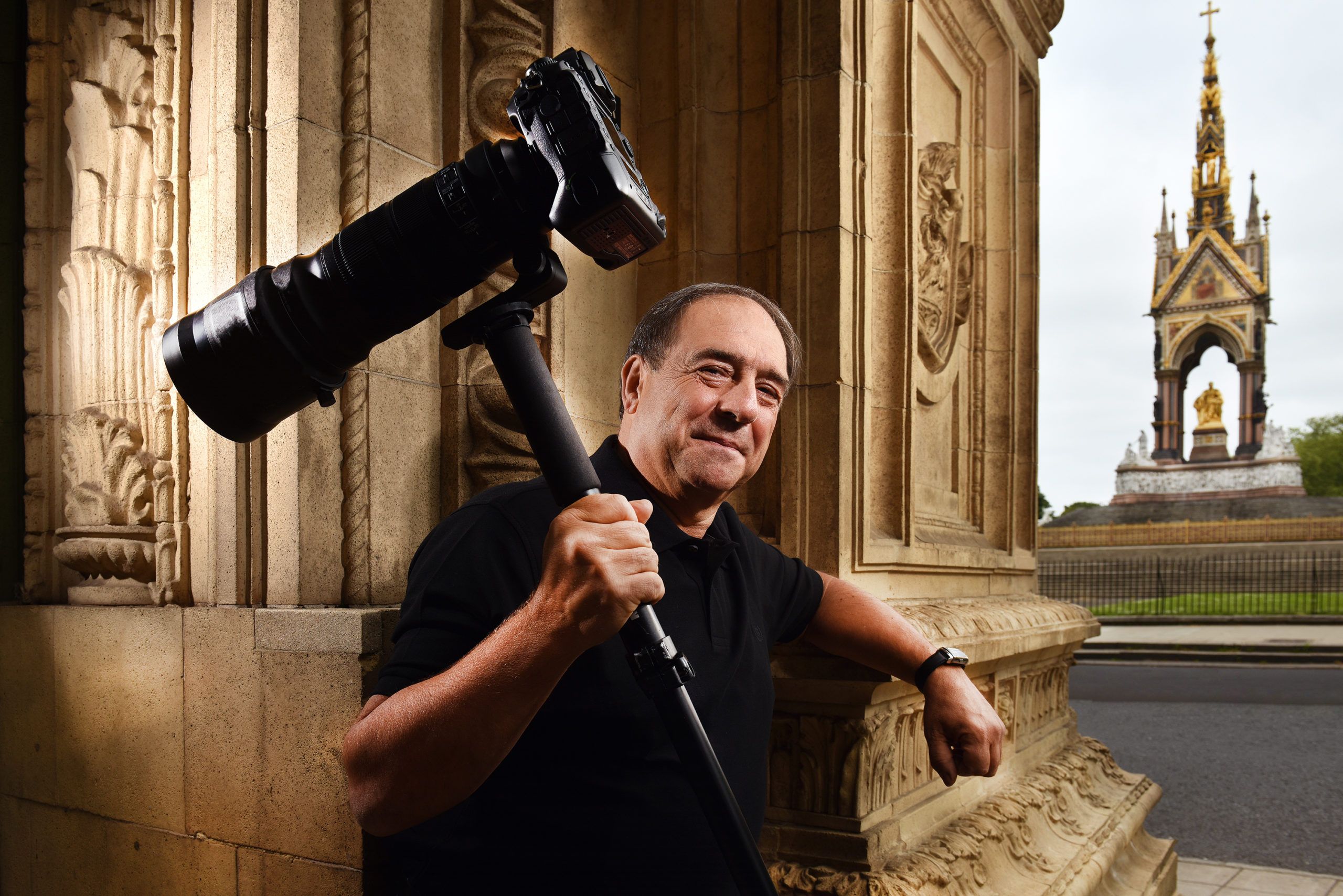 Chris Christodoulou began his photographic career in 1979 at the Royal Albert Hall where he was the house photographer for 33 years. He specialises in live classical music, opera and show photography. This year he celebrates several important photographic milestones, 40 years of photographing the BBC Proms, 30 years opera production photography at the Royal College of Music and 25 years at Middle Temple.

My first job in the Temple was on a freezing cold night in November 1995. Dr John Birch, the then Temple Church Organist, knew my work from the Royal Albert Hall; I had been the House Photographer there since 1979 and he was curator of the organ. John wanted a picture of the Choir outside the Church for a Christmas card. The shoot was a great success and the start of a long and happy connection with Temple Church, Middle and Inner Temples.

I have photographed many royal occasions – including more than 300 in London – but royal visits to Middle Temple, whether official or private, are always special. Over the years I could not fail to notice how much royal visitors enjoy coming to Middle Temple and relaxing in the company of Benchers and members they know so well. HRH The Duke of Cambridge is an enthusiastic and committed Royal Bencher and he plainly loves being part of, and adding to, the history and traditions of the Inn.

Three royal occasions stand out: the re-dedication in 2013 of the Temple Church organ with HM The Queen and HRH The Duke of Edinburgh; the year-long events in celebration of 800 years of Magna Carta, leading up to the national commemoration at Runnymede in June 2015; and TRH The Duke and Duchess of Cambridge’s private visit to meet the students awarded their Cambridge Scholarships in October 2012.

Archival photography is a significant part of my work and my first important archive commission for Middle Temple was to photograph the stained-glass windows in the Hall as full panels and individual crests. They had never before been photographed in their entirety. Each of the 14 windows, and the 16 individual panels which make up each window, had to be recorded.

Two major challenges immediately presented themselves. The first was that I was entirely at the mercy of the daylight (or rather lack of it); the second was my fear of heights! I had to spend two weeks with a heavy plate camera (and endless other photographic kit) 18 feet above ground up a scaffolding tower. It was amazing to be up close and to be able read details which are simply not visible from ground level. I was left in no doubt as to the exemplary artistic skill and craft of these, the very best, stained-glass window makers.

After the success of the stained- glass windows, the next project was to photograph every piece of silver in the Middle Temple collection, being sure to record their corresponding hallmarks. The game of ‘find the hallmark’ on a piece of 16th Century silver which has been polished for 400 years proved to be as challenging as photographing the silver itself. If you want to photograph silver, it can be summed up in just one-word – ‘reflections’. You need a little reflection to give the image depth and life, but you do not particularly want an image of the photographer and his lights, tripod and camera reflected in the silver you are trying to photograph. After several tests, I built a one metre square cube out of 6mm opaque perspex sheeting with a little hole for my camera lens to poke through and painted white to further minimise any reflections. I was then fully in control of my lighting and the amount of shadows and reflections I wanted to introduce into the shot. The importance of the commission became immediately apparent when Ian Garwood, the Inn’s Director of Estates, handed me the collection schedule with the valuations. It was at that point that I developed a routine of devout prayer when handling each piece of silver from the vault to my studio just outside to be photographed.

The following year it was the turn of the Molyneux Globes to be my silent sitters. On this occasion, we had the heavy perspex protective shell surrounding the globes removed for the photographs, but not before I had been reminded as to the value and historical importance of these, possibly the two most important globes, and certainly the earliest surviving globes, to be made in England. Lighting had to be simple and minimal as with any globe shape reflections are almost inevitable. In the interests of safety, I had made two small shatterproof glass discs which I placed between my lights and the globes just in case my lights faltered and, yes, the Book of Common Prayer made its second appearance in as many years.

The Inn’s vast and irreplaceable collection of documents, books and manuscripts, to which additions are constantly being made, often require professional recording, so a portable studio is set up in a convenient area and under the direction of staff from the Archive Department, where all the work can be carried out on site and in safety.

Over the years, I have photographed almost everything in the public areas of the Middle Temple. A few years ago, I captured for the archival record, and for a subsequent book, the 719 Armorial Panels (and counting!). The challenge was to date and caption each image. I wrote and read more Latin during this commission than in my entire schooldays. It was fascinating to study the design and painted figures and to try to relate them to the name of the person bearing the arms.

Photographing the collection of paintings posed similar problems to those of the silver with the added challenge that every painting had to be photographed in-situ. The essential requirement is to be able accurately to reproduce a copy from the image taken without having the need to refer again to the original painting, so a true and accurate colour balance is vital. To attain this, before a painting was photographed, a printed colour bar was placed alongside to provide a constant reference from which to work. The need to work in-situ in a limited space did not allow for the optimum positioning of my lighting and in some cases that caused blooming effects and unsightly fogging, so I used both creative lighting and polarizing filters to eliminate this.

The project to photograph every building exterior in Middle Temple took a little more than a year because, although there are only 43, we had to wait for frontages to be clear of building works scaffolding and we were at the mercy of the weather. Most are listed and, looking back at the images, I can easily understand why the Temple is a favourite location for film producers. All I had to do was to remove the colour from an image and the photograph became 100 years old with quite remarkably few, if any, aerials or trappings of the 20th Century in sight.

The armour was taken down from the Hall, cleaned and preserved by specialist antique metal conservator, William Hawkes, in 2017. After cleaning and stabilising the collection this was a great opportunity to photograph the armour while it was accessible and in pristine condition. Again, one of the privileges of my job is to meet so many interesting people. It was enlightening working with Bill, whose extensive knowledge of medieval armour is remarkable.

Every ten years or so, the interior of the roof of Hall undergoes a full survey. Each time the scaffolding is put up inside Hall, the Estates Department, knowing my difficulty with heights, always thinks up (to their great hilarity and entertainment) some new element of the wonderful roof beams and the work on them, which needs to be photographed and recorded. Most recently, when
I scaled the heights, I concentrated on the carpenters’ marks on the beams, which date back to 1562, when they began to build Hall. These are not just initials and memorials of long-dead craftsmen. The roof trusses were fashioned and checked for fit on the ground, where Fountain Court now is, before being craned up into their final positions. So, a pair is marked ‘Left 1’and ‘Right 1’ to make sure they got it right.

Photography requirements at the Temple are endless, ongoing building and progress photography, intimate and more formal dinners. In all of London it is my favourite location for celebrations – I recently had my own birthday party in the Bench Apartments – and a photographer’s dream venue for weddings.

The Middle Temple is, to me, much more than a historic and prized relic. It is a living and working treasure in the heart of London, just a few metres off the Strand, where thousands pass every day completely unaware of what is inside. My association with the Inn for 25 years has been a wonderful privilege.