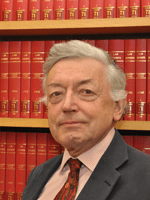 Master Andrew Longmore was educated at Winchester College and Lincoln College, Oxford. He was Called to the Bar in 1966 and took Silk in 1983. A Judge of the High Court from 1993, he was appointed a Lord Justice of Appeal in 2001 until his retirement in 2019. He was Autumn Reader in 2010.

This ‘delightful patchwork of memories’ (as Master Brown modestly calls it) deserves a wide readership among Middle Templars and beyond. It is full of fascinating and highly amusing stories about life at the Bar and on the Bench. Nor is it confined to such matters; as its title suggests there is much about outside interests, his prowess (or lack of it) on the golf course among them. Even the introduction tells a good story in which the author is castigated by a new and young golfing acquaintance for having had the same wife, the same house, the same model of car, the same holiday destination and the same golf club for 50 years. This unnamed City banker suggested that Master Brown must be bored out of his mind. The book is essentially an explanation of how wrong that new acquaintance was.

The curious title stems from an occasion when Master Nigel Wilkinson, peeved by a belittling remark from the author with whom he was playing in the Scrutton Cup, deliberately hit the ball onto the roof of the clubhouse at Woking and then insisted that Master Brown should play the ball as it lay. A ladder was procured and our hero was required to climb up and play the ball from the roof. Miraculously he succeeded in getting the ball onto the green. Somebody then leaked the story to the Daily Telegraph which gave it half a page spread, complete with a photograph of the roof and our hero in full-bottomed wig and court dress.

Golf only occupies one chapter, however, and most Middle Templars may be chiefly interested in the author’s time at the Bar and on the Bench. He records Lord Bingham’s advice to a student to ’Go to the Bar – that’s where the magic is’ and then proves how right Lord Bingham was. He tells how a client once took the oath on a steak and kidney pie, how an apparently guilty teenager on being asked how he pleaded said ’I plead, most emphatically, not guilty’ and was indeed acquitted and how an acquitted arsonist told his startled counsel that there was no need to worry about his future conduct since he had just landed a job as assistant groundsman at Lord’s.

But the highlight of Master Brown’s life at the Bar was undoubtedly the time he spent as Treasury Devil. He lifts the lid on both the pleasures and the agonies, which even earned him the right to take part in Lord Denning’s valedictory and said that generations to come would recall that ’short sentences are best, and verbs optional’.

I once attended a seminar on Judgment Writing given by Lord Bingham. He began by saying that the opening paragraph of any judgment of Master Brown was invariably a model of how a judgment should begin. He then read a couple of examples and it was apparent that they contained a succinct of the issues in the case which anyone could understand. So it is with this book; although narrated in an amusing and detached manner, no word is wasted and any temptation to go into deep legal analysis is firmly resisted.

The book is loosely chronological (although it is not until the author is firmly on the Bench that he reveals that he swam the Bosphorus as an undergraduate) and describes the tribulation of his first murder case as well as the pleasure of being a Circuit Judge. He tells how the chair of the Norwich Housing Committee, on being invited to dinner in the Norwich lodgings and being invited to retire with the other ladies, proceeded to make apple pie beds for him and his clerk as a retaliatory gesture.

Of all the courts in which Master Brown sat it seems that it may have been the Court of Appeal which he enjoyed the most but there is no doubt that the House of Lords and the Supreme Court gave greater scope to his talents. Only towards the end does a slight note of disillusionment creep in when he describes some of his colleagues in the Supreme Court as betraying excessive soft-heartedness. He then gives this as his explanation for ceasing to oppose Lord Sumption’s appointment to the court straight from the Bar.

I have naturally tried to find an error in the book but that has proved difficult. I would only say that anyone brought up in Shropshire will be surprised to see Gobowen described as ‘a small branch line station’. At the time when Master Brown disembarked there to begin his National Service training in 1955, it was on the main line from Paddington via Birmingham to Birkenhead. Even now it is on the main line from Cardiff to Holyhead.

Do get and read the book. It is utterly engrossing.