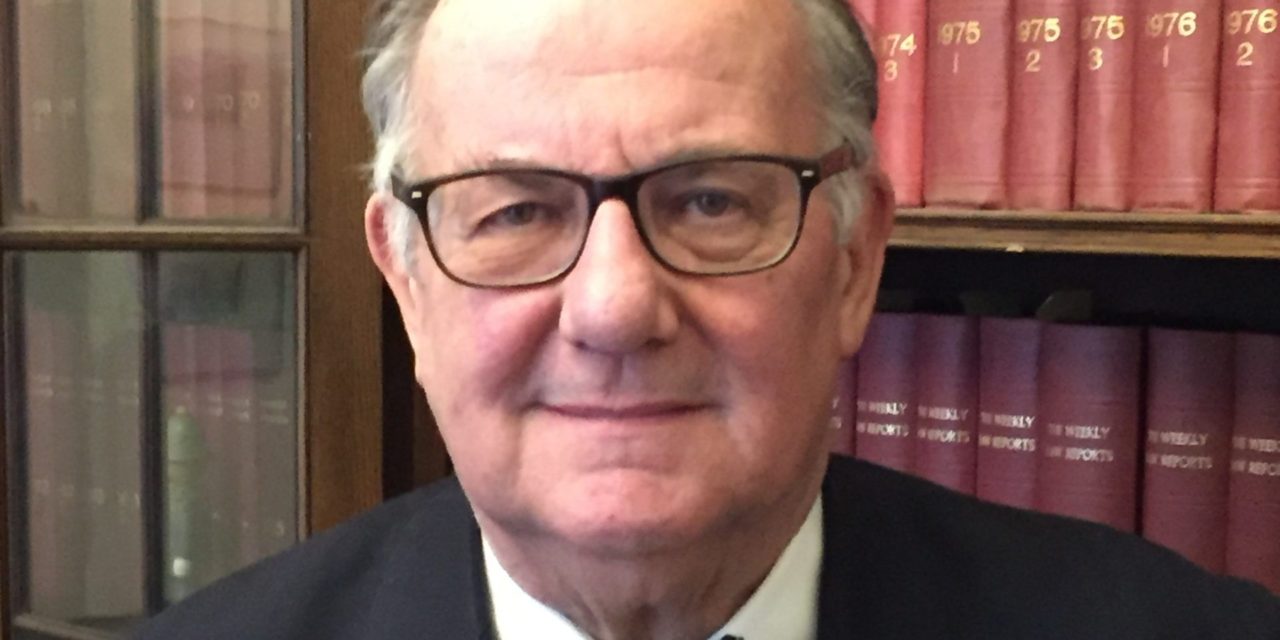 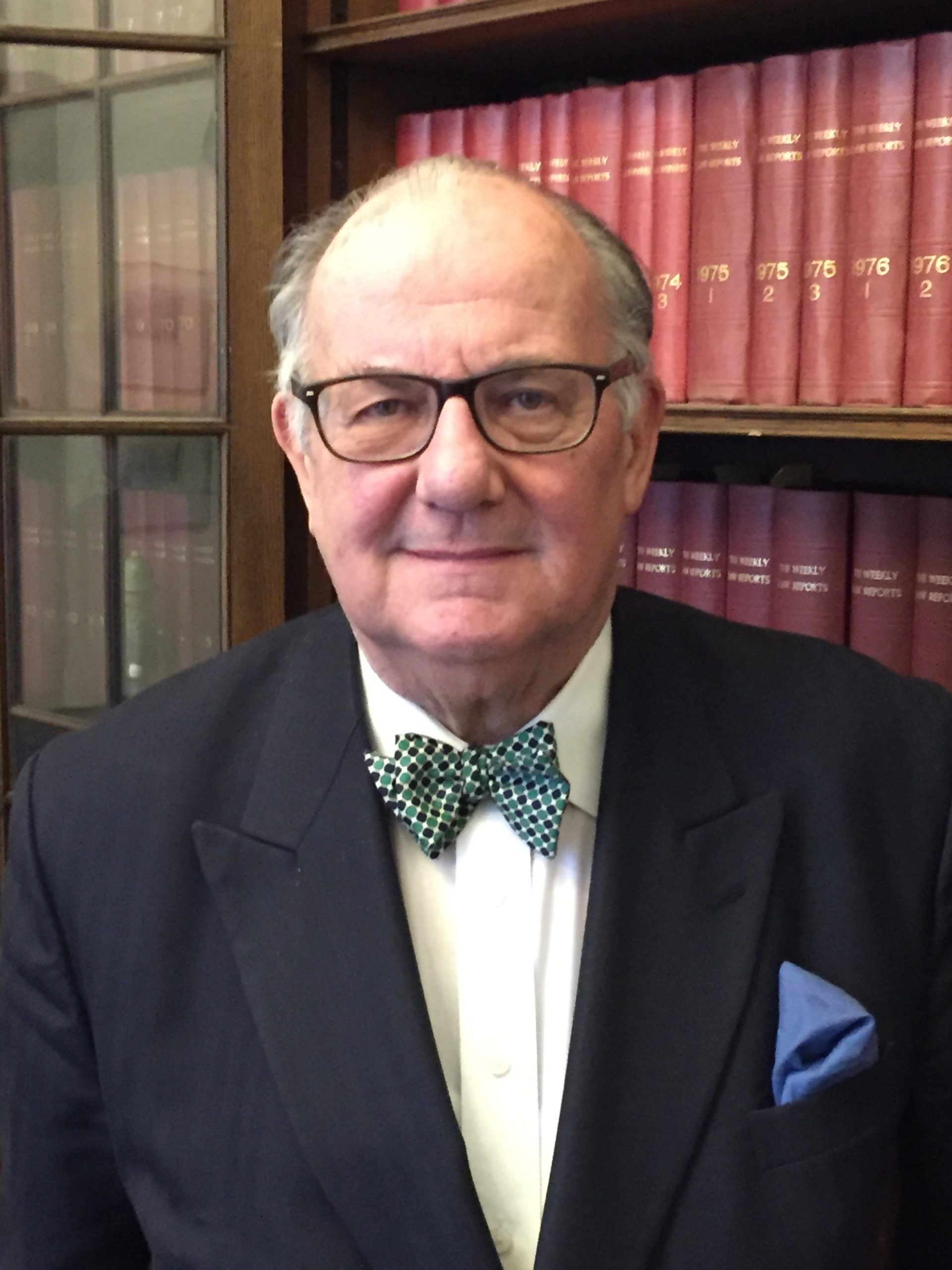 Master John Leslie was a Queen’s Bench Master from 1996 to 2016 and has been a Bencher of the Inn since 2002. He was appointed Master of the Silver in 2017. He grew up surrounded by silver, as his father’s business was in the London Silver Vaults; so he has had an interest in it all his life.

The Inn’s Silver Catalogue lists ‘The Ceremonial Plate of the Middle Temple and the New Inn’. In particular it describes two ‘Panierman’s Horns’, nine ‘Badges for Watchmen, Porters or Warders’, three ‘Ceremonial Porter’s Staves’ and a large ‘Silver Oval Breastplate’. Immediately, some questions may arise: ‘Who was a “panierman” and why did he have two horns?’. ‘What is or was the “New Inn” and why does the Inn have its plate?’

The Horns and the Panierman

The older of the horns is made from an elephant’s tusk with five silver bands, but with a replacement mouthpiece mounted on a section of buffalo horn; the silver bears the hallmark for 1716. The Inn’s records show that it was acquired in 1716/17 for the then panierman, Richard Claypoole. As it is very fragile it has been mounted on a plinth, which bears the date 1927. Its fragility probably led to it being out of use by the early 20th Century as the second horn first appears in the records in 1904. This is altogether simpler, being entirely of buffalo horn with the rim and mouthpiece in silver; hallmarked for 1903.

The Oxford English Dictionary gives ‘pannier’ as a variant of ‘panier’ and defines it as a large basket for carrying food, etymologically originating from the French ‘pain’ and Latin ‘panis’ – bread – thus, perhaps, originally a breadbasket. Its contemporary meaning has come to include the bags or containers slung on a motorcycle, viz those slung on beasts of burden. The Dictionary then defines the word ‘pannierman’ as ‘the name of a paid officer in the Inns of Court who brought provisions from market (with a horse and panniers) and had (in later times at least) various duties in connection with the serving of the meals etc.’ and, further, quotes a work of 1661, stating that the pannierman’s ‘Office was to blow the Horn for Dinner and wait at the Barristers table’.

The Inner Temple also had a panierman and their Horn remains in their collection. It dates from about 1785 and is similar in form to the more modern one in our collection. This conjures up an audio picture of the potential cacophony as the Horns were sounded around the Middle and Inner Temples as dinner approached.

Incidentally, the writer remembers that the tradition of blowing the Horn around the Inn to announce dinner continued into the late 1960’s or early 1970’s (then by the Head Porter). At certain times of the year this was at the same time as the lamplighter made his rounds of the gas lamps. The legend was then current that the sounding of the Horn had originated as the means to call the young gentlemen students of the Inn back from wild fowling in the marshes on the south side of the Thames before the door to Hall was locked for dinner.

Badges and the New Inn

There are seven badges for the Middle Temple officers and two for those of the New Inn. The former date from 1828 to 1851 and have the Inn’s emblem of the Holy Lamb chased onto them; this derives from the coat of arms of the Middle Temple blazoned, in heraldic terms, as ‘Argent on a plain Cross Gules, the Holy Lamb Or’ familiar to all Middle Templars as describing a red cross on a white ground with the Paschal Lamb at the cross. The latter two badges date from 1833 and bear the coat of arms of the New Inn, which are blazoned as ‘Vert a Flower-pot Argent maintaining Gilly-flowers Gules’ which may be described as ‘A silver/ white vase containing red carnations on a green ground’.

These were the badges of office of the Watchmen, Porters and Warders of the Inns – each is named and numbered thus: the Middle Temple badges – ‘Watchman No. 1’, ‘2’ and ‘3’; ‘No.4 Watchman and Porter’; ‘Porter No. 5’ and ‘Warder No.1’ and ‘2’ and the New Inn badges – ‘Porter No.1’ and ‘2’. These officers were constituted constables within their Inns.

The New Inn was an Inn of Chancery. These Inns (over time they totalled about nine in number) were so called from their origin in about the 14th Century as the offices of and accommodation for clerks in Chancery who were in holy orders; they worked for the Lord Chancellor, who himself at that time was also always a cleric. Although the origin of the names of these Inns and of the Court of Chancery (now the Chancery Division of the High Court) is the same, the members of these Inns, as they evolved, were by no means confined to the Chancery Bar. Over time, the Inns evolved into college-like establishments where students prepared for entry to an Inn of Court, each Inn of Chancery being attached to an Inn of Court: Gray’s had Staple and Barnard’s Inns, Lincoln’s had Thavie’s and Furnival’s and Inner Temple had Clifford’s, Clement’s and Lyon’s.

Middle Temple originally had Strand and St George’s Inns. The Strand Inn may also have been referred to as Chester Inn as the premises were close by the London house of the Bishop of Chester. However, in the 16th Century, those premises, which were situated near the church of St Mary le Strand (the church still in the Strand, now opposite the main entrance to King’s College), were taken and demolished to allow for the erection of Somerset House. At about the same time the students of St George’s
Inn joined their fellows from Strand Inn, because their buildings were falling into disrepair and, at the eastern end of Fleet Street, were some distance from Middle Temple. The students removed to (the then aptly named) New Inn which was established immediately to the west of Clement’s Inn in the premises of a hostelry or ‘common Inn’ which had operated under the sign of the Virgin Mary as ‘Our Lady Inn’. The site of Clement’s Inn is immediately to the west of the Royal Courts of Justice and, although nothing remains of the original buildings of either of these Inns, the buildings now there, many occupied by the London School of Economics and Political Science, retain the name Clement’s Inn.

In the 17th Century the Inns of Court started excluding lawyers who were not to practise or who were not practising at the Bar. Thus, solicitors and attorneys became the sole members of the Inns of Chancery, although it is evident that some connections between the Inns of Court and their Inns of Chancery continued until the latter were finally dissolved in the late 19th or very early in the 20th Century. All that remain of most of them are their names attached to more modern buildings or groups of buildings (as Clement’s Inn above), although much of the original premises of Staple Inn has survived and is still in use by the Institute and Faculty of Actuaries.

So, as an establishment which originally prepared students for admission to the Inn, these badges came into the Inn’s collection upon the demise of the New Inn.

The Breastplate and the Staves

All members of Middle Temple will have seen and be familiar with at least one staff and the breastplate used and worn by the Head Porter when he leads the procession of Benchers and guests at formal dinners in Hall. The silver breastplate bears the coat of arms of the Inn displayed in a garland of flowers and acanthus leaves. It is engraved on the reverse with ‘The Messenger to the Hono.ble Society of Ye Midle Temple’ and with the letter ‘T’ above the initials ‘HC’ for Master Henry Chauncy, who was Treasurer in 1685/6. It bears the hall mark for 1686.

The three staves are, first and grandest the Inn’s Temple Church Staff. At its head is a Lamb and Flag cast in silver as the finial mounted on a silver pommel and collar, which is hallmarked for 1684. The shaft of the staff is lignum vitae – said to be the densest wood of all. In procession in the Temple Church it is born by the Head Porter alongside his Inner Temple counterpart bearing that Inn’s Church Staff; this is dated to about 1705, fashioned from bamboo with a handsome silver finial mounted with the Pegasus of the Inner Temple. The second staff is the Head Porter’s made of ebony with a silver finial engraved on the top with the Lamb and Flag. It is also engraved, on the upper section, with the date 1733 with a ‘T’ above ‘CW’, although the staff is thought to be earlier, there being no hallmark to verify a date of its making. It is also engraved with the words: ‘This Staff Belongs To Ye Honble Society Of Ye Middle Temple’. It has a brass ferule at its foot. The third staff is the Under Porter’s. The silver finial is engraved on the top with the Lamb and Flag and, on the upper section, similarly to the Head Porter’s but with the date 1755 and the cipher for the Treasurer of that year, Master Benjamin Smart – ‘T’ above ‘BS’. The shaft is made of elm and is thought to be a 19th Century replacement of the 18th Century original. It too has a brass ferule.

The brass ferules on the feet of the Head and Under Porters’ staves have had to be sturdy. They have had to withstand the three loud and measured blows on the floor (as have the oak floorboards) administered by their bearers in order to announce to the members of Hall that the processions to and from the High Table are about to start. It is curious that those three measured blows are the same as are used elsewhere; most curiously in the mind of the writer as those given at La Comédie Française to announce the raising of the curtain and the start of the performance. But research as to any link between the two will have to await another day.

Amongst so many other much more important things in the Inn, one effect of Covid-19 has been the delay in the completion of the display cabinets for a rotating display of items from the Inn’s silver collection. The cabinets have been installed in the vestibule outside Master Treasurer’s room, but final insurance inspection, internal finishes and the finalising of the first items to be displayed have yet to be completed. It is to be hoped that this may be achieved by the end of the year. 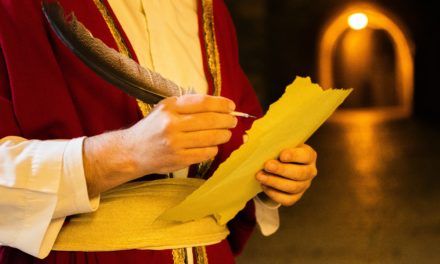